Ten female flamenco singers from Seville that we recommend listening to

That Seville is the birthplace of flamenco is beyond doubt. Many artists have come out of this land who have contributed to the history and evolution of flamenco singing, and whose influence defines it today. Mentioning them all in one post is an impossible feat. In this article, we are going to focus on the voices of women who are leaving their mark on this universal art.

We have selected ten current flamenco singers from Seville that we recommend listening to. Do you want to know who they are?

Known as Remedios Amaya, since she got on a stage, she comes from the Triana neighborhood. Flamenco singer and dancer who belongs to a gypsy family of flamenco artists of Extremaduran origin. He began singing in various tablaos in Seville, where he stood out for his excellent vocal skills, especially when he sang ‘cantes festeros’ (flamenco style cheerful singings).

He came to represent Spain at the Eurovision Song Contest with the theme Who handles my boat? in Munich and even the Camarón de la Isla said she was one of his “favorite singers”. Her artistic career, has recorded several flamenco albums, accredits her as one of the great female voices of flamenco.

This flamenco singer is originally from Coria del Río, a town in the province of Seville. He participated in the first edition of “Yo soy del Sur” on Canal Sur Television, taking the victory. In his artistic career she has shared the stage with Canelita, Ecos del Rocío, Paco Candela, María del Monte and María de la Colina, among others.

They say of her that she is a “revelation artist capable of bringing flamenco and novelty to flamenco”. She has forged her own style and is a voice with a future in flamenco singing, an art for which he has real passion.

María José has forged herself as a flamenco singer within a family fond of this art and gifted with singing. Since she was a child she began her idyll with cante jondo (flamenco tradicional) and her artistic training has been linked to Los Palacios and Villafranca, Sevillian towns with flamenco roots.

She is an artist who dominates the ‘cantes festeros’ and other more solemn ones such as the solea or seguiriya. Admire masters of the stature of Mairena, Fernanda, El Mellizo or Aurelio.

In 2018, he won the Lámpara Minera from the LVIII edition of the International Singing Contest of the Mine Festival, which is the highest award in the most important flamenco contest in the world.

Better known as “La Yiya”, this flamenco singer was born in the Seville town of La Puebla de Cazalla and was sponsored by José Menese at the Carlos III Theater in San Lorenzo de El Escorial (Madrid). She adopted her stage name, in honor of his grandfather who was called Yiyi.

She belongs to “the first generation of flamenco singers trained simultaneously in popular tradition and academic rigor”, according to Fernando Iwasaki.

She is a singer who masters the old forms of flamenco singing. In her records there is soleá, seguiriya, petenera, saeta, romance, malagueñas, tangos or tarantos, which supports his commitment to cante jondo.

Artistically known as Lole Montoya, this singer-songwriter is originally from the Seville neighborhood of Triana and was a close friend of the great figure of flamenco Camarón de la Isla. Along with Manuel Molina Jiménez they joined the flamenco duo Lole and Manuel, even entering the world from the cinema by Quentin Tarantino in the movie Kill Bill: Volume 2, with the song Tu mirá.

This flamenco singer has imprinted a very personal style to flamenco, opening the cante jondo to the general public, being the pioneer in the fusion between elements of classical music and poetry, adding it to more traditional styles such as bulerías, alegrías and tangos canasteros.

Thanks to the Algerian influence of he mother, she got to sing in the very Palace of Rabat for King Hasan II of Morocco.

Born in the Seville municipality of Isla Mayor and resident in the province of Almería, Sonia Miranda began her career in the world of flamenco with the singer José “El de la Tomasa”. Her first steps as a professional flamenco singer are rewarded with several awards in youth competitions, such as the absolute prize for the most complete singer in the National Competition for Young Flamencos in the Murcian municipality of Calasparra in 2001.

As a professional, this flamenco singer has come to participate in international festivals such as the Center Metropolitan in New York, a flamenco gala of great character. Sonia affirms that her great dedication to flamenco allows her to express her feelings, her state of mind and her most intimate feelings.

As for her style of personal singing, she highlights her clear influence of the Seville school in his performances by malagueñas, granaína, tangos, soleá por bulerías, cantiñas and seguiriyas.

She is one of the youngest and most innovative artists that the artistic neighborhood of Triana has. Rosario Guerrero, ‘La tremendita’, has been accompanied by flamenco from the cradle, since she is the daughter of the singer José “El Tremendo”. Being immersed in that flamenco atmosphere, she has known how to adapt her own innovations to cante jondo, to which she has always been linked.

She was awarded the Young Prize at the Antonio Mairena Festival, and in her record she has other recognitions such as the National Prize at the National Flamenco Art Contest of Córdoba. She is, after all, one of the new faces of flamenco at a national level and a specialist in bulerías.

Rocío Díaz also comes from a cradle of Flemish artists from Triana. This singer has lived, since her childhood, with great flamenco artists of the stature of El Mimbre or Nano de Jerez.

Rocío Díaz defines herself as an artist in constant evolution, as she has learned and perfected not only the discipline of singing, but the flamenco genre in all its splendor, exchanging very interesting talks about singing and flamenco with artists like Juan Valderrama.

As for her musical repertoire, Rocío is a multifaceted singer as we find in her works flamenco styles such as fandango, alegrías, bulerías, soleá and tangos.

Belonging to the flamenco lineage of Triana, Esperanza Fernández carries flamenco by flag. Heir to a family saga, with important singers, guitarists and dancers such as Curro Fernández, her father. In addition, she is considered an eminence in flamenco singing and the best female voice of this genre in recent years.

At just 16 years old, he participated as the main voice in the work “El Amargo” by Mario Maya and, since then, she began a continuous progression in flamenco art, sharing tablaos with artists such as Paco de Lucía, Camarón de la Isla or Enrique Morente. Her second CD, “Recuerdos”, was nominated for the best flamenco music album in the Latin Grammys.

Her specialty is tangos, although he also takes a tour of other genres that are further from traditional flamenco such as jazz.

As we can see, the Seville neighborhood of Triana has been and continues to be the cradle of flamenco artists. Serve as an example, the origin of most of these flamenco singers from Seville, artists that we recommend listening to. 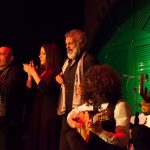