The April Fair in Seville, what is its origin?

The April Fair in Seville is here. Days to sing, dance, laugh and enjoy the color and joy that characterizes the most popular party in this city, a festival that attracts thousands of visitors hungry for fun every year.

More than a thousand booths give life to the fairgrounds of Los Remedios, a place that becomes a meeting point for family, friends and tourists willing to fully enjoy this week’s fair.

But the April Fair in Seville was not always as we know it today. It had another purpose and another location. Exhibition for the purchase-sale of livestock that gathered merchants in the Prado de San Sebastián, has become an annual event for the mere fun.

A celebration that has transcended borders becoming one of the best known fairs in the world. Do you want to know how was the origin and evolution of this party? Go for it.

Origin of the April Fair of Seville 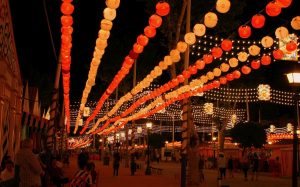 A hurricane. As you read it. A hurricane left the city ravaged in 1842. Following this natural disaster and the effect it had on the minds of the people of Seville, the councilors José María Ybarra (Basque) and Narciso Bonaplata (Catalan) proposed recovering the fairs of Seville, which had place in April and September, and whose permission of celebration granted for the first time Alfonso X El Sabio in 1254.

The proposal went ahead and in 1846 a three-day fair was organized for the exhibition and purchase and sale of livestock. A year later, this mercantile meeting was repeated in the Prado de San Sebastián with the approval of Queen Isabel II.

The success that year after year was reaping the Seville Fair, turned it into one of the biggest events of the year in the city and began to attract the attention of visitors from other corners of the country.

The atmosphere that was generated, accompanied by the singing and dancing of the sevillians, caused that the affluence of public was growing, which forced to change the location to respond to the demand and expand the capacity.

It was in 1973, when the April Fair in Seville arrived at the current site of the Los Remedios neighborhood. An event that has crossed borders and where gastronomy, dance and music have become the fundamental pillars of the party.

The flamenco dress of the April Fair in Seville

Another of the attractions of the fair are the colorful flamenco dresses worn by the sevillanas during these days. How and why did this attire become traditional to go to the fair?

The women of the cattle dealers, many of gypsies, came to the fair in their work clothes, some with ruffles and an apron.

Here is the origin of flamenco dress or gypsy, which became traditional to attend the fair from 1929, thanks also to the professionalization of flamenco, which took this attire as their own.

The proposal of fun and folkloric atmosphere invades every year the Real of the April Fair in Seville, a fair with several streets full of booths adorned with lanterns and details of Andalusian style, where you eat, dance and sing and flamenco Acquires a leading role. A date that attracts thousands of tourists from all over the world willing to enjoy this festive atmosphere.

If you visit Seville during these days and, in addition to the fair you want to see a unique flamenco show, keep in mind the proposal of our Tablao Flamenco El Palacio Andaluz, where you can enjoy a unique show while you dine and also visit our exhibition space where we have a recreation of a Sevillian house. We have special discounts for online reservations. We will wait for you!

PALACIO ANDALUZ ON TELEVISION, TRAPPED BY THE MAGICNews 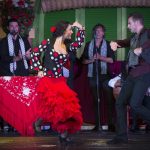