The flamenco bulería or bulerías is the flamenco style with festive tints par excellence. Halfway between the party and the mockery, this style has become in recent times one of the best known among the general public, but this has not always been the case.

Reaching the popularity of flamenco bulería since the late twentieth century has not been easy, since bulerías was not even considered a flamenco style. They were called cantes por fiesta or chuflas and they were the least ‘jonda’ part of the repertoire of baile, cante and flamenco.

The flamenco bulería is the most typical of Jerez de la Frontera (Cádiz) and already in its name gives us clues that it is one of the lively and joyful styles of flamenco. It is usually the dance that ends a flamenco party and is easily recognizable both for the most knowledgeable and for those who have few novices about flamenco. It is that moment in which the artists form a semicircle and come out one by one to dance a part of the piece. Recognizable, right?

Origin and evolution of flamenco bulería

If we look for the origin of bulerías, we have to look at another flamenco style: the soleá. The flamenco bulería derives from the soleá, a style that takes the structure of a compass, although with some variation due to a faster rhythm.

Flemish art historians point out that it was in the 19th century that singers such as El Loco Mateo and El Gloria decided to print an entity of their own to the bulerías and, in this way, to separate it from the soleá. An example of the link that exists between one and another stick are current cantes such as the “soleá por bulerías” or the “bulería por soleá”.

As we have anticipated, bulerías has its roots in Jerez de la Frontera, but the evolution and popularity of this flamenco styke also has the contribution of artists from other Andalusian corners, such as La Niña de los Peines or Manuel Vallejo, as well as the influences of other flamenco songs.

These influences and the work of various flamenco artists have led to different styles of bulerías such as the Bulerías de Jerez, the Cádiz, the Lebrija, the Utrera and the Triana, styles that, as can be seen in their name, bear the seal of the where this stick has evolved.

Although at first the flamenco bulería was a song for the dance, little by little this flamenco style was making its mark as an essential song in the interpretations of the cantaores or the musical recordings, thanks to artists such as Camarón de la Isla or Paco de Lucía, who made bulería a reference point for flamenco.

As for the dance, the bulería has also evolved and left the private celebrations to become an essential piece in the flamenco shows, either as a finale of the soléa or as an end to the party.

Making its cheerful and boisterous style, the interpretation of the bulerías allows the brilliance not only of the dancers, but also of the singers or musicians. It is a festive song of cheerful rhythm that admits all kinds of lyrics, with a strong performance and that lends itself to flamenco excitement and shouting by the artists during the performance.

Undoubtedly, the bulerías have acquired over time an entity of their own, both in the singing and in the dance, making a hole in the flamenco performances and becoming one of the styles that do not usually lack in the current shows, such as at El Palacio Andaluz.

In the two daily shows that we celebrate in our flamenco tablao, you can enjoy some bulerías performed by our artists. If you visit Seville and want to see a flamenco show live, do not hesitate to book your ticket to see our show. You will not regret! If you book online, you can enjoy discounts for early purchase. Do not stay with the desire to see bulerías live. 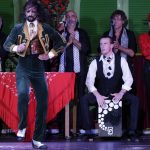 The flamenco cajón: history and origin of this percussion instrumentFlamenco 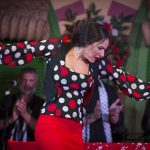