What is a flamenco tablao?

By El Palacio Andaluz
Posted 6 March, 2019
In Flamenco Tablao
What is a flamenco tablao?2019-03-062019-05-06https://elflamencoensevilla.com/wp-content/uploads/2019/11/tablao-palacio-andaluz-sevilla.pngEl Palacio Andaluzhttps://elflamencoensevilla.com/wp-content/uploads/2018/07/Flamenco-tablao-in-Seville-with-dinner-760x506.jpg200px200px
0

Flamenco tablao is part of this universal art and, without a doubt, it is the ideal place to enjoy a flamenco show with capital letters. But do you really know what it is?

If you know it, stay because we are going to discover some curiosities about the evolution and the origin of the flamenco tablao. If you are not clear about what is, be prepared to discover why you have to visit a place like this, if you want to meet the elf and flamenco art.

Let us return to the starting question, what is a flamenco tablao? Let’s say it is a place where flamenco shows are held and that have an atmosphere with references to this Andalusian art, that is, they are places that preserve the flamenco tradition.

Why should you visit a flamenco tablao?

It is called ‘tablao’ because the platform on which the artists act is made of wood, a material that has a quality sound for the ‘zapateado’ and also helps to protect the joints of the dancers.

In the flamenco tablao the dance and the cante are linked in perfect harmony offering the public a flamenco in its purest and most authentic state. Not in vain, these spaces are also known as ‘flamenco temples’, given their contribution to the recovery and maintenance of this Andalusian art throughout its history.

Flamenco is an art of feelings, emotions that are latent in the performances of artists. It is during the performance of a flamenco club, when an emotional communication is created that it reaches the viewer in an intense and unequaled way.

Only if you go to a tablao can you feel the stage vibrate with a zapateao, get infected by the beat or immerse yourself in the depths of flamenco because watching a live flamenco show facilitates that transmission of the essence of singing and dancing and, therefore, It is an art that awakens the senses.

The origin of flamenco tablao

Although it seems that the flamenco tablao has always been there, its origin is relatively recent, if we compare it with the birth of flamenco art.

The first tablaos arose in the mid-twentieth century, replacing the old singing cafes, which were the first spaces in which flamenco was shown to the general public, given that until then flamenco had been restricted to family celebrations or impromptu performances in sales and taverns.

These cafes singers settled in different parts of the Spanish geography, but had more roots in Cádiz, Seville and Madrid, places where they took their first steps masters of this art as Silverio Franconetti, Enrique el Mellizo or Niña de los Peines.

In fact, flamenco tablaos have served as a springboard for the most important artists in the flamenco world. It can be said that the great figures of this art have gone through some of the most famous and important tablaos, serving as a learning and subsequent leap to fame.

In the 60s, the tablao has its culminating moment, a time also in which flamenco becomes a universal art, being Andalusia its point of reference and cradle, that is why it is in this region where there are numerous flamenco tablaos, all, in the provinces of Granada, Córdoba, Cádiz and Seville.

Flamenco tablao: a meeting point for artists, politicians and celebrities

The tablao flamenco became a meeting point not only for the artists who started their career in the world of flamenco, but also for the public that came to enjoy their shows in these spaces, where art and happiness were wasted.

The rise of the tablaos made it common to see well-known personalities from the world of show business and politics in these places they came to be seen. The photographers and reporters of the time also echoed this ‘flamenco revolution’, which caused the Hollywood stars who passed through Spain included in their agenda enjoy a good flamenco party.

It was a time when great flamenco cantaores such as Camarón de la Isla or Enrique Morente emerged, and guitarists like Paco de Lucía, who were in favor of the modernization of flamenco and its universalization, thanks to the interest of international record companies for this art.

What characteristics does a flamenco tablao have? 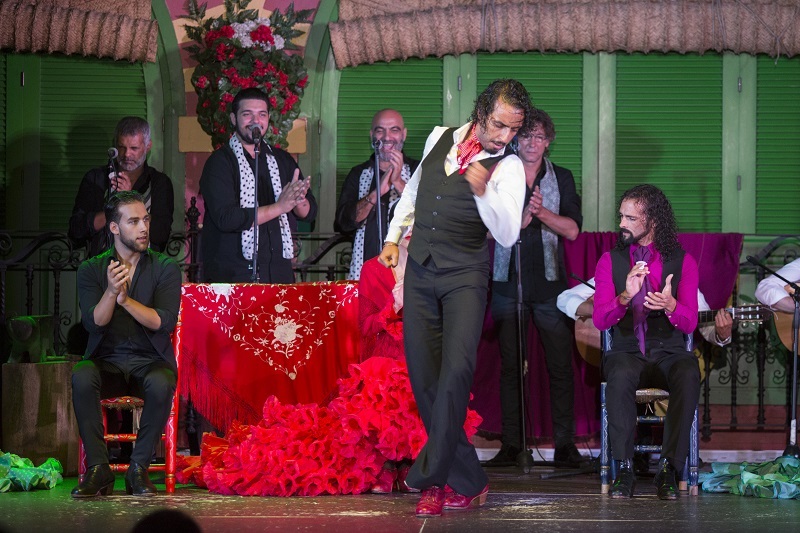 In a flamenco tablao the details are pampered so that the public can enjoy each performance to the fullest. You have to take care of everything from the distribution of seats, to decoration, lighting and sound.

In a flamenco show, acoustics is very important. In the case of the floor, it must transmit a sound of quality, clean and pontentious, bearing in mind that the taconeo of the bailaores and bailaoras, are part of the interpretation and the percussion of the flamenco style.

At present, the flamenco tablaos continue to be a place of reference where to enjoy flamenco singing and dancing. They are considered as the most suitable spaces to taste and live flamenco in its most natural state.

If you visit Seville, we invite you to visit the Tablao Flamenco El Palacio Andaluz, which has a show that is unique in Andalusia due to the number of artists who go up to the stage every night. You can enjoy a show that takes you through the most pure and traditional flamenco, but also includes more innovative pieces such as the flamenco adaptation of the opera ‘Carmen’ by Bizet.

If you want to meet the flamenco duende in an environment that keeps the aesthetics of the old Sevillian singer cafes, do not hesitate to visit our flamenco tablao. We will wait for you! 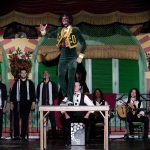 El Palacio Andaluz, a flamenco tablao from Seville to the worldFlamenco Tablao 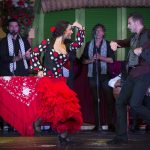 Why you should visit a flamenco tablao in Seville?Flamenco Tablao