The April Fair of Seville is here. The city is preparing for its most festive week in which fun will not be lacking and, above all, the booths of the Real will be filled with flamenco music and dancing, among which the sevillanas, the flamenco style par excellence of the fair. Let’s learn a little more about this style.

If you take a walk on any Andalusian street, there will not be a lack of souvenir shops where you can buy a souvenir of our culture and our art. Surely reading this has come to mind one of the most iconic: the figure of the girl dressed in flamenco making a movement of arms and suit known as `the Sevillian ‘. And it is that, the Seville is not only that woman born in Seville, but also one of the most famous flamenco styles in the world: ‘sevillanas’.

This folkloric dance is one of the most popular in Andalusia and Spain. In Andalusian schools and also outside this region, dancing is taught as part of one of the parties that represent us the most. A clear example is the Seville Fair of April.

Looking for the origin of sevillanas

But what is its origin? The beginning of the sevillanas dates back to the Renaissance Seville, when the bars of the popular zarabandas were slowing down. From the seventeenth century they were transformed into seguidillas to be sung and danced in the Arenal neighborhood, one of the best known of the Seville capital.

It was not until 1740 when Pedro de la Rosa delimits it to three bodies subdivided into three thirds for, since the beginning of the nineteenth century, evolve into the Sevillian bowling. All this way finished in the dance that we know today, formed by: introduction, exit, return, exit, return, exit and closing.

The truth is that many do not consider the Sevillanas as a flamenco style proper, but it is undeniable that it is part of the Andalusian hallmark.

Under a 3/4 time compass, that is to say, of three times, four movements are framed that are repeated in each one of the parts that form a Sevillian: paseíllo, pasado, confrontation and auction. If you enter any booth, the first thing you will see will be dozens of female arms moving from the bottom up and hands, with a very characteristic wrist turns. The men, however, do not move their bodies so much, giving an accompanying image to the woman’s dance.

This dance of four parts is done in pairs, although there are many who form a circle to dance, as large as they are able to follow the beat. It is very common to see in the `streets’ of the April Fair women in a circle dancing sevillanas while others sing them.

All sevillanas have the same type of structure: four letters of seguidillas separated from each other by the well-known well-standing position of the bolero dance.

The difference between the variants lies in the topics that they deal with and the rhythm, giving rise to the best known:

The sevillanas are a dance and sing that have been evolving with society, which gives them the perfect blend of tradition with the new customs.

The sevillanas, like each flamenco style, are wrapped in peculiarities that make you recognize them instantly. The first thing is the accompaniment, with guitar, a flamenco cajón, castanets and palms. All this comes together in four seguidillas of a 3/4 time signature and some predefined steps. That is, sevillanas have a `choreography ‘that you can learn, although the` age’ (abbreviated variant of the word angel used in Andalusia to define the talent or grace of a person) of each is what will differentiate you.

Another characteristic is the flamenco dress. Although it is not essential, they give more `salt ‘to the dance and endow it with even more movement. With each turn, the ruffles move in time, making it clear that their function within the costume is more than decorative. Although since 1929 a tradition has become, its origin goes back to the women who attended the cattle fairs, many of them of gypsy ethnicity (hence the name of the gypsy costume), with their work dresses , some with ruffles and apron.

If you are in Seville during the April Fair, although this year is celebrated in May, and you will see live Sevillanas, they will hypnotize you. Also, if you prefer to venture into a flamenco tablao to enjoy a unique flamenco show, you can go to El Palacio Andaluz and feel our art while you dine. You will also enjoy a sevillanas dance with prestigious artists.

Visit our recreation of a Sevillian booth and let yourself be carried away by the magic of our artists on stage. We have special discounts for our online bookings. We will wait for you!

We also invite you to know our sevillanas online course, if you want to learn this popular style of Seville. 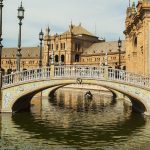 Flamenco in Seville, a hundred-year-old idyllFlamenco 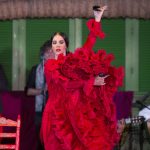 What is the ‘duende flamenco’?Flamenco