As the song says, Seville has a special color, and part of that chromatic richness that is breathed through every corner of this city, is provided by the flamenco air that runs through its streets. We invite you to take a flamenco tour of Seville, to discover the spaces with the imprint of the artists who have made history and have influenced the evolution of this art.

From the legacy that Triana cradles to the memory of the Alameda de Hércules. From flamenco artists who improvise their art on Avenida de la Constitución or Plaza de España, to professional shows held at tablaos such as El Palacio Andaluz on the island of La Cartuja. The city of Seville is full of places where you can enjoy an authentic flamenco experience.

We invite you to join us on this flamenco tour in Seville where we will show you some of the emblematic places that we recommend you visit and where you can find monuments dedicated to the most renowned Sevillian artists. Shall we start?

The streets of Triana have been and continue to be the cradle of many emblematic figures of flamenco. It is something that can be felt in many corners of this suburb, where if you look up from the ground, you will be able to notice the number of plates and details that the Triana neighborhood houses in honor of these artists.

Curro Fernández, one of the deepest singers born in Triana, lived in a house located on Fabié street. It was an old corral in which you can still hear the rumble of the cantes jondos (flamenco songs) and the dances to the beat of the payos and gypsies who lived together here then.

Nearby and on this same street José Sánchez Bernal was also born, artistically known as “Naranjito de Triana”, another cante professional who grew up breathing the flamenco atmosphere of this neighborhood. The commemorative plaque reads the recognition of its neighbors to “who as a recreator and conservator of the old Triana school of flamenco singing carried the name of Triana with pride and dignity to all stages of the world”.

You don’t have to move much to come across the old Peña del Bollo, a place where neighborhood artists met and where “Nuevo día”, the first album by Lole and Manuel, were born, exponents of what would be New Flamenco. 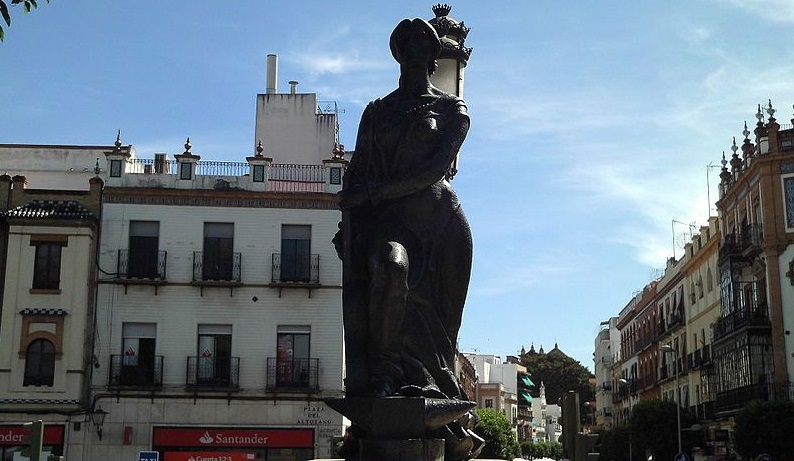 Statue tribute to flamenco in Plaza del Altozano in Triana

And it is that Triana is a neighborhood with a lot of art and the plates follow one another on the walls of its buildings to remind the passer-by who were born and lived in this prolific corner of Seville. There are also statues, such as the one in Plaza del Altozano, dedicated to singing, dancing and flamenco.

Flamenco in the Alameda 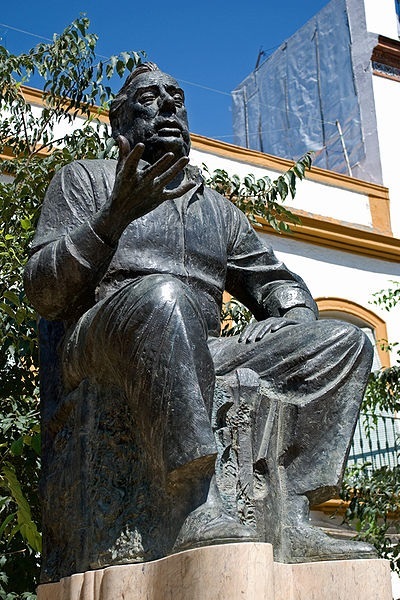 Statue of Manolo Caracol located in the Alameda de Hércules

At this point nobody doubts that Seville is the world capital of flamenco, and to corroborate it you just have to take a walk around the Alameda de Hércules.

Here, specifically, there were several “popular flamenco auditoriums”, including the Colmao de La Sacristía, Los Majarones and Las Siete Puertas, as well as the Kiosco de Pinto, where Manuel Vallejo performed for the first time as an artist. professional.

In the Alameda the first singing cafés were founded in the late 19th century and it was the epicenter of the most bohemian flamenco, as well as the first singing and dancing academies such as that of singer Adelita Domingo and that of dancer Realito.

To this day, this corner of Seville continues to maintain that essence that makes you vibrate with the purest flamenco art. If you walk around, you will find on Calle Calatrava the house where Pastora Pavón lived for much of her life, “La Niña de los Peines”, considered as “the female voice of flamenco singing of all time“.

In the Alameda de Hércules itself, there is a corner where tribute is paid to another cante legend, Manolo Caracol, with a figure of his bust. This artist was a resident of this area and grew up in what is now Calle Lumbreras.

Not far from the Alameda de Hércules and the Alfalfa, in the Plaza del Cristo de Burgos, we find the figure of Manuel Serrapí Sánchez, artistically known as “Niño Ricardo”, a master of flamenco guitar. If you continue your flamenco tour of Seville and head to the heart of the city, at the crossroads between Calle O´Donell and Calle Velázquez, you will see the bust that pays tribute to the Sevillian dancer Pastora Imperio.

In the surroundings of the Cathedral, near the walls of the Reales Alcázares, Antonio Ruiz Soler, nicknamed “El Bailarín”, has an emblematic street in his honor, in the heart of the Barrio de Santa Cruz.

To end this flamenco tour in Seville, it is best to end the day on a tablao and watch a live flamenco show. This city has many places to enjoy the essence of this art. Our recommendation is that you visit El Palacio Andaluz, on the Isla de la Cartuja, where you can live a complete flamenco experience because, in addition to the show, you can visit the Museum of Flamenco and Andalusian Art in Seville and taste a dinner, while you enjoy the singing, dancing and Andalusian guitar. 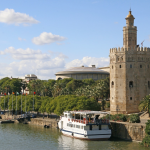 Curiosities of Seville that will surprise youSeville 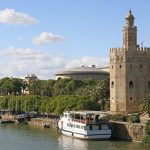