The guitar in flamenco

The role of the guitar in flamenco is fundamental in a current show. If we go to a tablao, the most usual thing is to see the singer (cantaor), accompanied by the guitarist and the dancer (bailaor or bailaora). This is so now, but although it is hard to imagine, in the origins of flamenco, the singing (cante) was the only protagonist and the guitar and dance were later incorporated into this art.

The emergence of flamenco tablaos has a lot to do with the integration of this instrument in flamenco music. It was in the nineteenth century, when thanks to the popularity that these ‘Cathedrals of the Duende’ reached, the guitar joined the cante that, until then, dispensed with any musical instrument. In fact, the singings “a palo seco”, are a legacy of that primitive song that the artist interprets without any accompaniment, being the voice the only support.

At the time of setting a date and a responsible for the incorporation of the guitar into flamenco there is no unanimity. However, there are historical references that indicate that it was in 1850 and with the help of Francisco Rodríguez ‘El Murciano’, when this integration took place. There are writings that speak of an artist who “accompanied the folk songs of his native land with a small guitar”. Although nicknamed ‘el murciano’, Francisco was from Granada.

What is certain is that in the twentieth century culminates the fusion of the guitar with flamenco singing, a fusion that drives the rise of flamenco shows and the popularization of this art. But in addition, with the incorporation of this instrument the structure of the flamenco palos is consolidated and flamenco cante schemes are regulated, granting them inputs and outputs with the melodic accompaniment of the guitar.

The guitar or toque, in addition to accompanying flamenco singing and dancing, is an instrument that has evolved over time, reaching its peak in the 70s thanks to performers like Paco de Lucía, a teacher and a reference for many guitarists. and artist revered by flamenco lovers.

Flamenco guitarists, also known as tocaores, like other artists have their own techniques in their performances, some more evident than others for the eye of an amateur. If you look at classical guitar and flamenco shows, the most striking difference is posture. The flamenco guitar player usually crosses the legs and supports the guitar on the one that is higher, while the mast keeps it almost horizontal with respect to the ground.

As far as the instrument itself is concerned, there are also differences and specific characteristics. The flamenco guitars are light and are usually made of cypress wood, a material that gives brilliance to the sound and adapts very well to the characteristics of this musical genre. In addition, it counts a narrower box so that the sonority is smaller and does not eclipse the singer’s voice.

As for the interpretation of the flamenco styles, the techniques most used by flamenco guitarists are alzapúa, picado, tremolo and rasgueo, mainly.

The use of the thumb is another characteristic feature of the touch with which the sonority of the instrument is enhanced. And with the beating, as an element of percussion, the guitarist prints strength to the interpretation.

The flamenco ‘toques’, that is, the way in which the guitarist plays the guitar are also classified according to their interpretation, as summarized below:

Nowadays, all flamenco shows are composed of singing, dancing and guitar. In a flamenco tablao, these three elements are linked in perfect harmony offering the flamenco audience in its purest and most authentic state.

If you visit Seville, we invite you to visit the Tablao Flamenco El Palacio Andaluz, which has a show that is unique in Andalusia due to the number of artists who go up to the stage every night. Where there is no lack of singing, dancing and, of course, the guitar. We will wait for you! 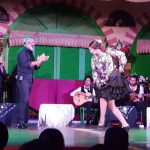 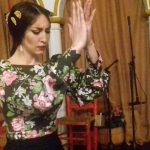