What flamenco styles you can see in our show in Seville?

By El Palacio Andaluz
Posted 4 May, 2018
In Flamenco Show
What flamenco styles you can see in our show in Seville?2018-05-042018-11-26https://elflamencoensevilla.com/wp-content/uploads/2019/11/tablao-palacio-andaluz-sevilla.pngEl Palacio Andaluzhttps://elflamencoensevilla.com/wp-content/uploads/2018/05/flamenco-styles-of-show-in-seville-760x507.jpg200px200px
0

If you are looking for a place to enjoy a flamenco show in Seville, do not go any further and come to El Palacio Andaluz. Why do we make this proposal? Because you will be able to see the best show in Andalusia, given the cast of artists who go up to the stage of our tablao every night and the flamenco styles they play.

It is a pure and traditional flamenco performance, which bears the signature of Emilio Ramírez ‘El Duende’, principal dancer, choreographer and artistic director in this Andalusian tablao. In addition to the ‘more classic’ part, the show includes a flamenco adaptation of the opera ‘Carmen’ by Bizet, an interpretation you can only enjoy at El Palacio Andaluz.

For the staging of this flamenco show we have renowned bailaores, guitarists and singers that give life to a function that has been chosen by TVE (Spanish Television) for the promotion and dissemination of this art, given its visual and artistic quality.

The tablao celebrate two perfomances every day, the first at 7:00 p.m. and the second at 9:30 p.m., with an hour and a half duration. During this time, feeling and passion emerge on the stage through different flamenco palos that make up this exceptional show, designed for the public to enjoy the most outstanding and representative of this universal art. 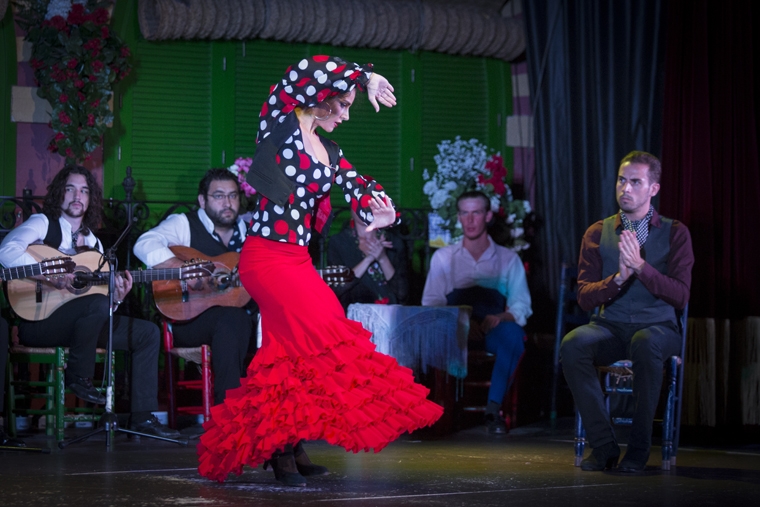 The flamenco styles that are performed at the Seville show

Knowing the details, characteristics and curiosities of the flamenco styles that are part of our show, will help you understand why this performance is so peculiar. We start

We started the tour of the soleá, a flamenco style that has up to seventeen varieties. Its slow tempo allows the show of the flamenco dancer, as well as performing very feminine movements with hands, body and hips, in addition to the famous taconeo that the spectator likes so much.

The alegrías of Cádiz belongs to the group of cantiñas (sings of the Cádiz city par excellence). Apparently, this modality derives from the Navarre-Aragonese jota, for that reason that many of the letters that are interpreted are directed to the Virgin of the Pillar, the Ebro river and Navarre.

For its melody, the alegrías are a flamenco style of festive character and that incite the dance. They are similar to the soleá, but with a more lively rhythm. This is where the famous letter tiriti tran tran …

The taranto is a flamneco style that has its origin in Almeria. It descends from the taranta, but unlike this one, it has a compass that allows dancing. It was born in the early nineteenth century and is considered the quintessential cante of the mines of Almeria. It has been merged with other styles of sing Murcia, Jaen or Malaga. Pedro ‘El Morato’ is considered the first person to sing a taranto and Carmen Amaya, the first to dance it.

On the other hand, the guajiras are native to America and were covered in Andalusian sing. This style is an adaptation to the flamenco melodies of the Cuban point, a series of songs called guajiros that are grown in the rural areas of the island of Cuba. It is for this reason, why the theme of his lyrics often refer to Cuba, especially Havana, its meals, its streets … Among its most prominent interpreters are Enrique Morente or El Niño de la Huerta.

The farruca is one of the most recent flamenco styles. It arises in the folklore of the North of Spain and was introduced in Andalusia by the hand of the waiters who were going to work as seasonal, tavern or fish fryers. Later, the Andalusian musicians adapted it to what we know today.

The caña, on the other hand, is perhaps the most important flamenco model. There is a diversity of opinions on the origin of caña. Some say it comes from an ancient Andalusian song and others relate it to the soleá or toná. Curro Dulce, Silverio and Antonio Chacón are the singers who have best captured their essence, Chacón being who sweetened and gave the caña the ideal rhythm.

Finally, we talk about the seguiriyas, which together with the soleá and the bulería form the backbone of flamenco. They originated mainly between Seville and Cádiz. This style is the typical ‘cante jondo’ with tragic lyrics that reflect the suffering of human relationships, love and death.

However, despite its painful lyrics, this flamenco styles allows to enjoy a pleasant and cheerful moment. Numerous cantaores delight us with the interpretation of seguiriyas, among which we can highlight Manuel Molina or Antonio Chacón.

These are some of the flamenco styles that are part of our show in Seville, a show that you can enjoy while you dine or have a drink. In addition, if you make the online booking, you can benefit from the discounts we have for advance purchase. We will wait for you! 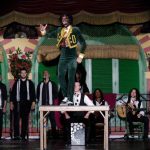 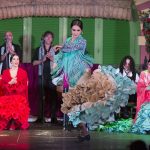 What is a flamenco show and why do you have to watch one live?Flamenco Show