Complements for flamenco dancing: the fan

There are several elements that artists use in their performances to give more sense, if possible, to flamenco art. The fan is one of the complements for the most used flamenco dance, especially by women during their interpretations. It is an accessory worlwide recognized and not only characteristical of this artistic expression, but also of the whole Spanish culture.

A bit of the fan history

The fan is a complement to the flamenco dance that has its origin in the Asian continent around the 7th century. Although cultures such as the Egyptian or the Greek already used certain types of elements for fanning, we can not directly associate these instruments with the fan of rods used in flamenco art nowadays.

This one came to European territory by the hand of Portuguese traders in the 15th century. This accessory experienced its maximum splendor during the reign of Louis XIV and Louis XV, under whose regency the fan ran as an essential complement in the wardrobe of the nobel ladies.

It was considered a luxury item and used to be made with expensive materials such as precious stones or Italian fabrics.

Parts of the fan

Over the years the fan became an affordable complement for all social levels, and its structure was simplified to what we know today. The fan consists of 3 pieces: the rods, the “clavillo” and the ‘país’. 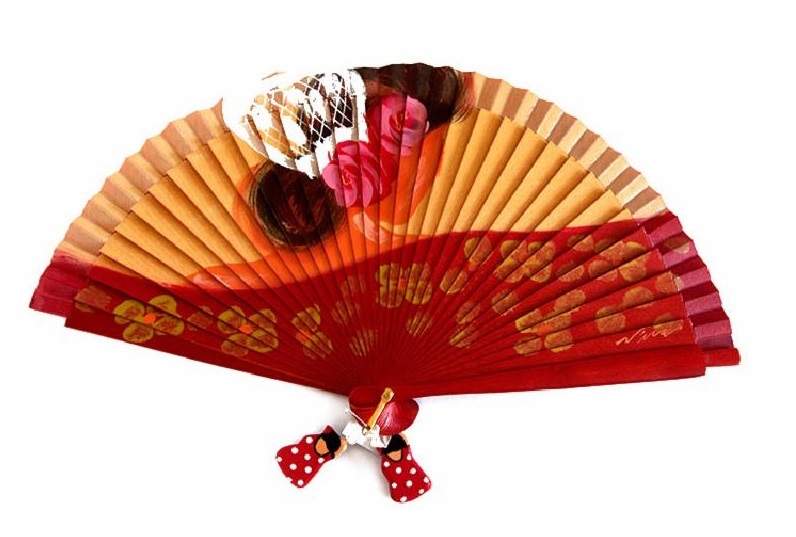 Source of the image: http://www.flamencobuy.com

The rods are the rigid sheets that make up the fan and can be made of different materials such as wood, bamboo or plastic. All the rods are joined in its lower part by the ‘clavillo’, which makes the function of axis, and on the upper part they form a kind of guide.

The first and last rods are called “cabes” or “guards”, and are usually a bit thicker and wider than the rest as they have the function of protecting the fan when it is closed.

The ‘país’ is finally the most striking part of this accessory, since it can have a really multifaceted  appearance. It is the part normally made of fabric, which makes of bonding element beteween the rods and fits.

The language of the fan

The fan has been attributed a specific language used to send some ‘secret’ messages’. The ladies of the court used to use the ‘fan language’ to communicate with the knights. Some of the most popular meanings were the following:

The fan in the flamenco dance

Nowadays, it can be said that the fan is a mere fashion complement, although it also has a functional use in summer  time. But it is precisely the use of that particular language that caused it to become a complement to flamenco dancing, where it plays an essential role.

Thanks to the use of the fan in flamenco, the dancers manage to give a special grace and style to their interpretations. Being flamenco a sensual dance, the inclusion of this accessory manages to increase the spell of charm that dancers cause with their movements.

Now that you know a little bit more about the use of the fan as a complement to flamenco dance, we invite you to see a live performance in our tablao flamenco to check on your own how our dancers move the fan during their performances.

If you visit Sevilla, you have to watch a live flamenco show. We are waiting for you at El Palacio Andaluz! 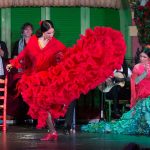 Flamenco dress: history and origin of this Andalusian dressFlamenco Complements